The god Serapis in Egypt

The god Serapis was probably first introduced in Egypt by Alexander, although it was Alexander’s successor Ptolemy I (r. 323-283 BCE) who helped popularize the god there by bringing the god’s statue from Sinope (a city on the Black Sea in present-day Turkey, east of Istanbul) to Alexandria, where Greeks were beginning to settle. Ptolemy also established the Alexandrian library and the world’s first university with a medical school. (Segerberg, p. 99) 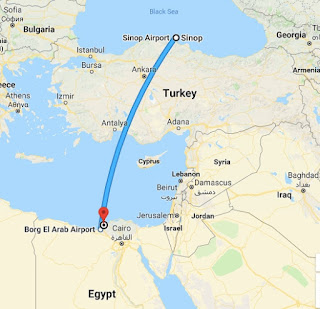 The route from Sinope in the north to Alexandria in the south.

Legend holds that Ptolemy told his advisor — Timotheos of Eleusis, or, "the Eumolpid" (Rose, p. 108; Cumont, p. 51) — that he dreamed of a statue with a serpent at its feet — the serpent having three heads of dog, wolf, and lion — and a corn measuring pot as a hat. His advisor identified the image as the famous statue of Serapis, and Ptolemy felt it might unify the Egyptians and Greeks in Alexandria as well as incorporating the Babylonian religion. Despite three years' of resistance from the people of Sinope who did not want to part with it, the statue "magically" took itself by boat and installed itself in the new temple, called the Serapeum or Serapeion, in Alexandria. (Rosenbloom)

The earliest statues of Serapis from the Ptolemaic period did not have the hat. The hat appears in statues from the later Roman period. (Source: University College London) Eleni Vassilika writes: “The most popular cult image of Serapis shows him draped and regally enthroned, wearing his corn-basket kalathos-crown over thick wavy locks, with the triple-headed beast Cerberos seated at his side. The crown associated the god with the fruits of the earth, and the beast, possibly confused with the Egyptian jackal deity Anubis, was related to the god’s role as conveyor of the dead.” (Vassilika, p. 104) The kalathos is also known as a modius. “At the time of the Antonines,” Cumont wrote, referring to the Roman imperial rule from 138-180 CE, “there were forty-two Serapeums in Egypt.” (Cumont, pp. 74-75)

The name “Serapis” came from either Asar-Hapi (the Egyptian names for Osiris-Apis) or possibly the Chaldean deity Sar-Apsi. Chaldea was in southeastern Mesopotamia, northwest of the Persian Gulf.

Serapis, like Osiris, in Egypt was understood to be the brother/husband of Isis. He was believed to be the resurrection of the creator Ptah, who was ritually slaughtered, mummified, cremated, and then, in the form of the Apis bull, entombed. Apart from these broad associations, there are no surviving specific myths about Serapis.

Poems in honor of Serapis were written by the philosopher Demetrius of Phalerum who credited the god with curing his blindness. (Cumont, pp. 74-75) "Serapis’ blessing was sought for children and the sick, and he was regarded as a Saviour who spoke through oracles and in one’s dreams." (Vassilika, p. 104)

The Christian patriarch Theophilus, bishop of Alexandria, together with the Roman emperor Theodosius, axed the statue and torched the Serapeum in 391 CE, representing, in Rosenbloom's words, "the final destruction of paganism in Rome’s once tolerant empire." (Cumont, pp. 84-85; Rosenbloom) "An excellent evocation of this moment, when a syncretistic and sophisticated culture is nearly completely harassed out of existence by the rising single-minded zealotry, can be found in Georg Ebers’s 1885 novel Serapis [PDF], published in English translation [by Clara Bell, from the German] in New York the same year.” (Rosenbloom)

Ebers has Theodosius order the destruction of the idols in Alexandria and continued worship (or failure to report it) punishable by a fine of 15 pounds of gold. He has the Christian deacon Eusebius incite supporters:

"Not our grandsons, no, but our own children will ask: Who — what was Serapis? For he who shall be overthrown is no longer a mighty god but an idol bereft of his splendor and his dignity. * * * The ruined edifice of the Serapeum, the masterpiece of Bryaxis laid in fragments in the dust, and thousands of wailing heathen!" (Ebers, p. 216, 219)

Meanwhile, thousands of followers of Serapis gather in the vast, doomed temple. Damia, an elder woman who follows the old Egyptian gods, preaches her way:

“If, when Serapis falls, the universe does not crumble to pieces like a ruinous hovel, then the wisdom of the Magians is a lie, the course of the stars has nothing to do with the destinies of the earth and its inhabitants, the planets are mere lamps, the sun is no more than a luminous furnace, the old gods are marsh-fires, emanations from the dark bog of men’s minds — and the great Serapis...But why be angry with him? There is no doubt — no if nor but...” (Ebers, pp. 261-262)

In the novel, the high priest of Serapis is named Olympius, “famous now for his learning” (p. 108).

"On a platform of rocks and mighty masonry rose a structure of wonderful magnificence and beauty, so brilliantly illuminated by the morning sun that its noble proportions and gorgeous colors showed in dazzling splendor and relief. Over the gilt dome bent the cloudless blue of the African sky, and the polished hemisphere shone, as radiant as the sun whose beams it reflected. Sloping planes for vehicles, and flights of steps for pedestrians led up to the gates. The lower part of this wonderful edifice — the great Temple of Serapis — was built to stand forever, and the pillars of the vestibule supported a roof more fitted to the majesty of the gods than to the insignificance of mortals ; priests and worshippers moved here like children among the trunks of some gigantic forest. Round the cornice, in hundreds of niches, and on every projection, all the gods of Olympus and all the heroes and sages of Greece seemed to have met in conclave, and stood gazing down on the world in gleaming brass or tinted marble. Every portion of the building blazed with gold and vivid coloring; the painter’s hand had added life to the marble groups in high relief that filled the pediments and the smaller figures in the long row of metopes. All the population of a town might have found refuge in the vast edifice and its effect on the mind was like that of a harmonious symphony of adoration sung by a chorus of giants.

"All hail! Great Serapis! I greet thee in joyful humility, thankful that Thou hast granted to my old eyes to see Thy glorious and eternal temple once again!” murmured Karnis in devout contemplation." (Ebers, pp. 18-19)

One of Serapis' followers "had been accustomed to regard the Serapeum as the very heart of the universe — the centre and fulcrum on which the balance of the earth depended; to her, Serapis himself was inseparable from his temple and its atmosphere of magical and mystical power." (Ebers, pp. 193-194)

”The head of Serapis was the eternal Mind; in his broad breast slept the Soul of the Universe, and the prototypes of all created things; the world of matter was the footstool under his feet. All the subordinate forces obeyed him, the mighty first Cause, whose head towered up to the realm of the incomprehensible and inconceivable One. He was the sum total of the universe, the epitome of things created; and at the same time he was the power which gave them life and intelligence and preserved them from perishing by perpetual procreation. It was his might that kept the multiform structure of the material and psychical world in perennial harmony. All that lived — Nature and its Soul as much as Man and his Soul — were inseparably dependent on him. If he — if Serapis were to fall, the order of the universe must be destroyed ; and with him : The Synthesis of the Universe — the Universe itself must cease to exist.

But what would survive would not be the nothingness — the void of which her grandmother had spoken; it would be the One — the cold, ineffable, incomprehensible One! This world would perish with Serapis; but perhaps it might please that One to call another world into being out of his overflowing essence, peopled by other and different beings.” (Ebers, p 195)

An underground sanctuary to Serapis was described as follows:

"...in which the adepts were required to go through certain severe ordeals before they were esteemed worthy to be received into the highest order of the initiated — the Esoterics. The halls and corridors which she now went through, and which she had never before seen, were meagrely lighted with lamps and torches, and all that met her eye filled her with reverent awe while it excited her imagination. Everything, in fact — every room and every image — was as unlike nature, and as far removed from ordinary types as possible, in arrangement and appearance. After passing through a pyramidal room, with triangular sides that sloped to a point, she came to one in the shape of a polygonal prism. In a long, broad corridor she had to walk on a narrow path, bordered by sphinxes; and there she clung tightly to her guide, for on one side of the footway yawned a gulf of great depth. In another place she heard, above her head, the sound of rushing waters, which then fell into the abyss beneath with a loud roar. After this she came upon a large grotto, hewn in the living rock and defended by a row of staring crocodiles’ heads, plated with gold; the heavy smell of stale in- cense and acrid resins choked her, and her way now lay over iron gratings and past strangely contrived furnaces. The walls were decorated with colored reliefs: Tantalus, Ixion, and Sisyphus toiling at his stone, looked down on her in hideous realism as she went. Rock chambers, fast closed with iron doors, as though they enclosed inestimable treasures or inscrutable secrets, lay on either hand, and her dress swept against numerous images and vessels closely shrouded in hangings." (Ebers, pp. 273-274)

A British military ship named HMS Serapis launched in 1779 and was captured in 1781 by an American captain, John Paul Jones, whose own ship sank and who famously shouted, when things looked dimmest, “I have not yet begun to fight!” The ship was transferred to the French Navy in 1782. (Source: A page on modelships.co.uk, accessed 29 Dec 2003, that no longer exists)