The most embarrassing 'Dr. Phil' episodes

The "Dr. Phil" talk show addresses dynamics of dysfunctional relationships. Many of the problems people bring to the show can seem to embarrass them in the eyes of the viewers.

This article was originally published to Helium Network on April 13, 2014. 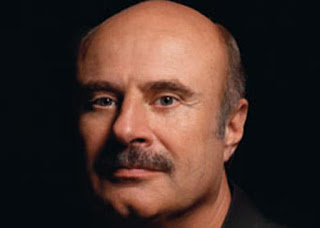 Dr. Phil is an American talk show host who brings together people in dysfunctional family relationships and makes them confront each other so that they can attempt to move their relationships through the impasse. The issues discussed on the show include rebellious teens, cheating spouses, drug use and violence, and when "talking it out" is not enough, Dr. Phil's team may offer a gift of inpatient rehabilitation or another appropriate psychological service.

The shows can be educational and emotionally moving. In some cases, at the same time, the dominant impression of the viewer is that the guests are embarrassing themselves. Here are some examples of embarrassing Dr. Phil episodes, with links to the episodes on YouTube.

A teenage girl admits using prescription pills daily for two years, stealing money from her mother to feed the habit. By the time the girl and her mother appear on Dr. Phil's show, the girl claims she's been clean for four months, but her mother doesn't believe her. The girl clarifies that, by "clean," she means that she only uses pills, cocaine and marijuana.

On the same episode, another teenage girl reveals to her parents that she's had sex with five boys and sent naked photos of herself to 30 boys. She chooses to reveal this to her parents on the show because she knows she is in a downward spiral and wants help. The faces of the teen and her parents don't appear on the show.

This episode features two teenage girls: one who fights with her mother who is presented as having made dubious parenting choices, and another who has an apparently sane mother yet every word that comes out of her mouth reveals her to be a hopeless brat. The girl even tells Dr. Phil during the televised interview that she's not paying attention. He makes plans to send her to a "structured environment".

Two addicts, one of whom is a 17-year-old prostitute, were so loaded with toxic substances that even their drug dealers were telling them they were close to death. Rehab saved their lives. Their case - complete with "'before' photos" - reveals how much mental and physical punishment someone can endure in the throes of drug addiction. In the second segment on the same episode, Dr. Phil interviews a 17-year-old escort who doesn't see anything wrong or concerning with what she's doing.

Dr. Phil had intended to focus on two girls during the hour-long episode, but because the first girl's interview took so much time, they were split into separate episodes.

The first girl's problem is picking fights. She's broken bones in people's faces on several occasions, and she puts videos of the fights on YouTube. When speaking to Dr. Phil, she acknowledges that her behavior is "embarrassing" and "immature," and she says that distributing those videos is "not something I'm proud of."

In one case, she picked a fight when she was visiting another city. In another case, she and three friends entered the home of another girl and jumped her in her own shower. She was arrested for the first time at age 13. Now that she's 16, the police have come to her house 80 times, according to her mother. Recently, the police warned her mother that they might take the girl to jail because she threatened a drive-by shooting.

Her mother believes that the girl is bipolar, and she says her daughter drinks every day and deals marijuana. When the two of them fight, the mother calls her names. Dr. Phil sends the girl for a psychiatric workup.

The second girl featured on the follow-up episode screams and hollers at her parents with minimal provocation, and their response is to participate in the dysfunctional argument. Dr. Phil's candid opinion is: "I think the two of you couldn't screw this child up any more if you had gone into a lab and created her like weird science."

A 24-year-old woman has stolen over $50,000 from her family, including through taking a credit card and forging checks, and she has "borrowed" a family member's BMW. As the daughter of a surgeon, she was raised with economic privilege, but she has not gotten her GED and generally does not hold jobs. She does not seem to have friends, either. In responding to these accusations, she gives the "affluenza" defense: her parents gave her everything she ever wanted, so she never learned to accomplish anything herself. Dr. Phil's team gives her $500 before the show as a test to see if she will offer it to her family to begin to pay them back for what she stole; she does not.

This three-part episode begins with a woman who "mothers" her ten pet rabbits, even to the extent of attempting to breastfeed them. Her rabbits all wear diapers and dresses, and they sleep in small bunk beds that are decorated as if for human children. Her adult daughter says that her mother has referred to the rabbits as her "sisters." In bringing her to the Dr. Phil show, her daughter says her behavior has gone "too far."

In the second part of the episode, a 48-year-old man wants to become a dog. Every day, he styles his hair to look like he has "dog ears" and he wears a dog collar. He occasionally eats canned dog food and sleeps in a dog house that he built. He has been asking a judge since 2010 to legally change his name to "Boomer the Dog." When he leaves the house in a full sheepdog costume made of paper strips, he doesn't speak, and instead barks at other people and dogs. He believes that other people enjoy this form of interaction with him. "It beats working, right?" asked Dr. Phil rhetorically.

He doesn't have a job; his parents established a trust fund for him, and he owns his own home. "I've never been on a date, ever," he says. He believes that he's a dog trapped in a human body, but he will accept the social label of "Furry" as a close substitute.

In the third part of the episode, a 20-year-old woman commissioned an artist to make her a furry red wolf head costume with rainbow accents. It's sturdy and has a helmet on the inside. She acknowledges that dressing up as the wolf is a hobby; she doesn't believe she really is a wolf. She explains:

"It's mainly about not talking to people when you're in suit that aren't in suit because it's all about keeping the act going. It's like being at Disneyland except you're in the suit."

Her mother thinks it's "creepy" and won't allow her to wear the suit around her friends.

Dr. Phil is concerned that this woman dropped out of high school and her mother is still paying her bills. Dr. Phil tells her:

The young woman acknowledges that this is an accurate assessment. "Why should we drag you, [just] because you want to wear a helmet?" Dr. Phil says, in reference to his opinion that her mother should stop enabling her.

It's no wonder that Dr. Phil is popular, many of the episodes described above have "shock value." It's visible in the faces of the live audience when they are surprised with the story that Dr. Phil trots out. But Dr. Phil also has solid interview skills and a no-nonsense attitude that cuts right to the point he wants to make. Viewers can learn about family dynamics and relationships from watching the show and examine their own behavior. While most viewers probably congratulate themselves that their own problems aren't as extreme or as embarrassing as the problems featured on the show, the show can nevertheless be a warning sign and a learning experience.