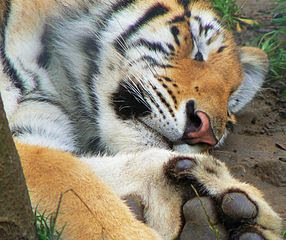 Tigers are among the most beautiful animals on earth. It's no wonder that some people are fascinated by them and feel a desire to keep them as pets. However, tigers are not domesticated animals. Small tiger cubs will soon grow up to weigh hundreds of pounds, and they can easily overpower and kill a person. Furthermore, because tigers are endangered, it is especially important to the overall tiger population and the ecosystem for more tigers to live in the wild.

Tigers can turn on their human keepers

Tigers occasionally maul their keepers. In 1998, in Florida, a tiger put Richard Chipperfield in critical condition. It was shot by Graham Chipperfield. The brothers were trainers for the Ringling Bros. and Barnum & Bailey Circus.

In 2003, Antoine Yates was mauled by a 500-pound tiger that he secretly kept in his apartment in a Harlem housing project. His brother found him injured on the floor and brought him to the hospital. To capture the tiger, police had to rappel down the side of the apartment building with a tranquilizer gun. Yates served six months in jail for endangerment.

He fondly explained his relationship with the tiger, "Ming": "To be close to such a beautiful animal 24 hours a day is magical. I began to really understand a big cat. At that point I was ready to disconnect from the world."

Also in 2003, a leashed white tiger mauled Roy Horn during a performance in Las Vegas. Horn, who had performed with tigers for three decades, lost enough blood to put him in critical condition.

In December 2013, a circus tiger mauled its trainer, Danny Gottani, in front of spectators in Madrid, including Gottani's own mother. Gottani had nearly two decades of experience with tigers. His injuries were not life-threatening. A spectator captured cell phone footage of the mauling.

Tigers are difficult to contain

One might think that the risk could be minimized simply by keeping the animal in a cage. It's not quite that simple. It's one thing to put a tiger in a box, and another thing to keep the box sealed.

In 1893, the Walter L. Main Circus Train derailed in Pennsylvania as it traveled downhill, leading to the escape of many exotic animals. One tiger entered a barn where it killed a cow and scared away the milkmaid. The farmer, Alfred Thomas, shot it.

The obvious danger presented by captive tigers was alluring to one depressed man who climbed into a tiger enclosure in China in a suicide attempt in 2014. (The tiger dragged him but refused to eat him.)

In the wild, tigers rarely bother humans. However, once a tiger learns to stalk humans as prey, it becomes a menace. A Royal Bengal tiger killed 10 people in Northern India over just two months in early 2014 and remained on the loose. Villagers were intent on finding and shooting the rogue animal, but it is easier said than done.

Celebrities who are known to have tigers

Tigers are expensive, and celebrities sometimes purchase them as status symbols or curiosities. These arrangements are usually short-term, as keeping a tiger is a lot of work.

An article in USA Today in 2003 reported that Michael Jackson kept two tigers ("Thriller" and "Sabu") on his Neverland Ranch; Mike Tyson kept three tigers at home ("Kenya," "Storm" and "Boris"); and Paris Hilton kept a mostly untamed tiger ("London"). All of these tigers were subsequently sent to live elsewhere. Hilton, whose TV show is ironically called "The Simple Life," wisely said of her tiger: "I don't have it anymore...[It] got too big, and if it ever got loose I'd be in so much trouble."

A four-month-old female tiger cub was given to Ukrainian prime minister Yulia Tymoshenko during her presidential campaign in 2009. Tymoshenko became a political prisoner, and the tiger, who had been named "Tigryulia" during its stint as campaign mascot, was sent to a zoo, where it gave birth to four cubs in 2012.

In 1837, U.S. President Martin van Buren was sent a pair of tiger cubs by the Sultan of Oman. Congress did not permit van Buren to keep the tigers and had them sent to a zoo.

Tigers are endangered in the wild. The Christian Science Monitor reported in 2011 that more tigers live in captivity in the United States than roam wild in all the world: "Because of a flourishing trade in exotic animals, there are an estimated 5,000 privately owned Bengal tigers in the U.S. There are only 3,600 Bengal tigers left in the wild."

In addition for the demand for tigers as pets, the demand for products made from slaughtered tigers leaves them vulnerable to hunters. For example, on Sept. 4, 2012, the HuffingtonPost reported:  "Police have seized four baby tigers and more than 100 pangolins being transported in a car in central Vietnam...Tiger bones are used in Vietnam to make a traditional painkiller that sells for several hundred dollars an ounce." Superstitions about the curative properties of tiger products thus sadly contribute to the animals' decline.

Don't get a tiger

Tigers are stunning creatures, but their care and feeding is a delicate matter that requires heroic effort. They can kill their human keepers, they are difficult to capture once they've escaped, and because of this, a license is generally required to keep one. If you are inclined to keep a cat, an animal shelter will have a small one for you. (Millions of unwanted cats are euthanized in the United States each year.) If you are inclined to help tigers, a good start would be a donation to a wildlife charity or to an organization like the Shambala Preserve that takes large cats from people "who realize they have purchased an animal they can no longer handle".

For kids, check out the book Big Cats Are Not Pets! by Julie S. Marzolf.

This article was originally posted to Helium Network on Feb. 27, 2014.