Who 'war' it better?: Why it's bogus to tweet about military prowess, especially with these numbers

President Trump recently distributed the following information, presenting it as a personal accomplishment that proves he is more competent or effective than his predecessor, President Obama. Here's why it is a mistake to use this information to make a point about who is more effective than whom. 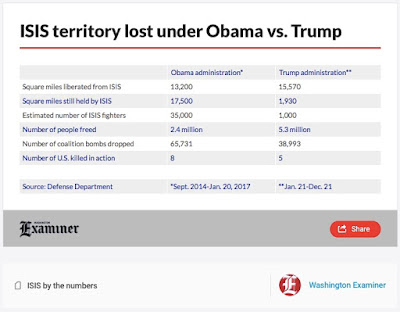 Screenshot taken from the Washington Examiner the morning of Dec. 29, 2017. The article was dated Dec. 23. A factual error in the information circulated widely online before the media outlet corrected it.

War is not a "who wore it better" contest.

Photo credit: Metmuseum.org This file was donated to Wikimedia Commons by as part of a project by the Metropolitan Museum of Art. See the Image and Data Resources Open Access Policy বাংলা | Deutsch | English | Esperanto | português | සිංහල | +/−, CC0, Link 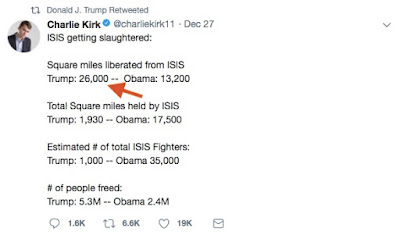 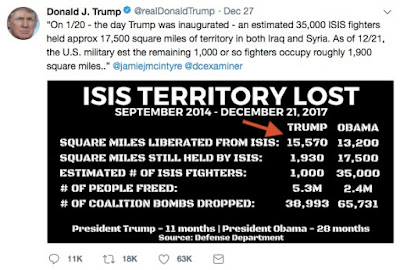 I do not argue that the President should waste a single hour of his time figuring this out. Instead I argue that he should not waste untold hours of everyone else's fact-checking time by tweeting things that either he does not understand or that he does understand and about which is happy to mislead everyone else.

Update: News broke on 14 February 2019 that President Trump would declare a national emergency to get funding for a border wall with Mexico on the grounds that terrorists are crossing the border. This is not true.

"In the United States since the 9/11 attacks, 455 jihadist terrorists have been charged or convicted or died before they faced trial. Not one of these terrorists crossed the southern border....And anyway, the vast majority of terrorists don't enter the United States at the southern border or anywhere else, because they are already in the country. Of the 455 jihadist terrorism cases since 9/11, 84% involved US citizens or permanent residents, and every lethal terrorist attack in the United States since 9/11 was carried out by a US citizen or legal resident....And there isn't a case since 9/11 of a terrorist being arrested at the border, according to New America's research." (Peter Bergen, CNN, 14 February 2019)

Furthermore, "the United States has seen a steep decline in the number of jihadist terrorism cases over the past four years," Bergen says, since "the geographical caliphate [of ISIS] is almost entirely gone and ISIS recruitment has slowed to a trickle." 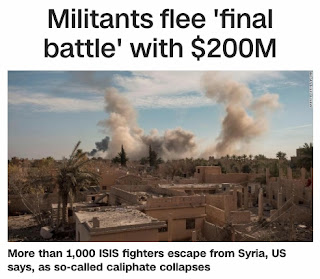 And on 17 February 2019, CNN reported that over a thousand well-funded ISIS fighters had simply relocated to Iraq: "More than 1,000 ISIS fighters have likely fled from Syria into the mountains and deserts of western Iraq in the past six months, and they may have up to $200 million in cash with them, according to a US military official familiar with situation."

The United States has a long history of debacles, mistakes, and catastrophes in the Middle East. But Donald Trump’s betrayal of the Kurds manages the near impossible. It incorporates all our past failures and then goes a step further by actually placing us on the side of our enemies while embracing their worst characteristics.

This time, we have joined the Axis of Evil.

It "is a new kind of low point," Rothkopf argues, because it "combines every single type of error noted above [in a list of U.S. foreign policy failures in the Middle East] and some new ones."

Worth emphasising the scale of the disaster Trump has wrought in the week since his call with Erdogan. 1. Revived Isis. 2. Cemented Assad’s grip on Syria. 3. Handed Russia yet another geopolitical windfall. 4. Betrayed the Kurds. 5. Immeasurably harmed US power. Thread 1.

The Kurds lost thousands of people defeating Isis. Trump has driven the Kurds into Russia's arms. The Russians mocked them (at the UN last week) for ever having trusted America, even while the US and Russia voted together against Europe to prevent a humanitarian pause. 3.