The actress Laverne Cox, in the 2020 documentary film "Disclosure" (see 12:35-14:15 in the Netflix version) says: "There is a history of emasculating Black men in this country, like, a literal history during slavery and during Jim Crow when Black men were lynched. Often, their genitalia was cut off. And so a Black men donning a dress is this emasculating thing. And I do feel like the relationship that a lot of Black people had to me [as a transgender woman] is about that legacy of trauma around the historic emasculation of Black men in America."

The documentary shows a clip from the 2017 TV series "White Famous."

Screenshot from 'White Famous,' as reproduced within the "Disclosure" documentary 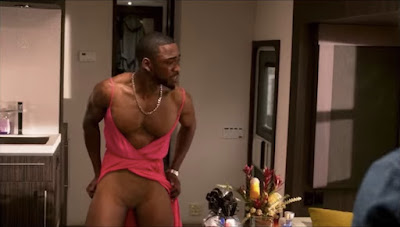