'Cruel Optimism': Wanting something that isn't really good for you 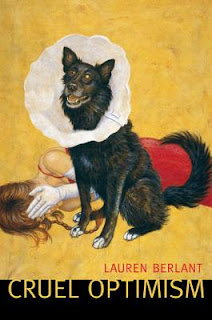 Optimism — Berlant says in her Introduction — may be described as “the force that moves you out of yourself and into the world in order to bring closer the satisfying something that you cannot generate on your own but sense in the wake of a person, a way of life, an object, project, concept, or scene.” (What this force feels like is individual and variable.) “Even those whom you would think of as defeated are living beings figuring out how to stay attached to life from within it, and to protect what optimism they have for that, at least.” The term “cruel optimism” means that “something you desire is actually an obstacle to your flourishing,” she says in the Introduction. This happens “when the object that draws your attachment actively impedes the aim that brought you to it initially,” or, in other words, “when the object/scene that ignites a sense of possibility actually makes it impossible to attain the expansive transformation for which a person or a people risks striving.” The feelings involved are also complex. One might feel “pleasures of being inside a relation” despite being “bound to a situation of profound threat”; this, too, is cruel. She is thinking in particular of “the fantasies that are fraying” in the late 20th and 21st centuries, like “upward mobility, job security, political and social equality, and lively, durable intimacy,” especially given our modern human condition that is so crisis-filled “that adjustment seems like an accomplishment.”

The period called “the impasse” is when a person “moves around with the sense that the world is at once intensely present and enigmatic, such that the activity of living demands both a wandering absorptive awareness and a hypervigilance that collects material that might help to clarify things, maintain one’s sea legs, and coordinate the standard melodramatic crises with those processes that have not yet found their genre of event.” In terms of the human ability to feel or function, an impasse is “temporary housing,” which is better than altogether falling apart.

A sudden event, yielding an aftermath “when one no longer knows what to do or how to live and yet, while unknowing, must adjust” is one kind of impasse. Another kind is “coasting through” a nameless status quo. (Chapter 6, p. 200)

“All attachments are optimistic.” (Chapter 1, p. 23) They are cruel when they present as "an affectively stunning double bind: a binding to fantasies that block the satisfactions they offer, and a binding to the promise of optimism as such that the fantasies have come to represent. Cruelty is the ‘hard’ in a hard loss. It is apprehensible as an affective event in the form of a beat or a shift in the air that transmits the complexity and threat of relinquishing ties to what’s difficult about the world." (Chapter 2, p. 51) The “double bind” is that “it is awkward and it is threatening to detach from what is already not working,” and that is why we sit in an “impasse of the present.” (Chapter 7, p. 263)

"Tragic optimism," by contrast, "is the ability to maintain hope and find meaning in life despite its inescapable pain, loss and suffering," in the words of Emily Esfahani Smith in the New York Times. The word was coined by Holocaust survivor Viktor Frankl. She explains: "For a long time, many psychologists embraced a victim narrative about trauma, believing that severe stress causes long-lasting and perhaps irreparable damage to one’s psyche and health." Today, however, psychologists believe that a majority of trauma survivors "exhibit what’s known as post-traumatic growth. After a crisis, most people acquire a newfound sense of purpose, develop deeper relationships, have a greater appreciation of life and report other benefits."