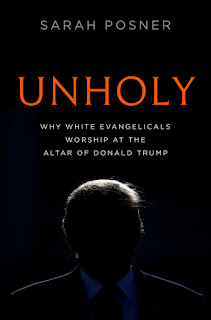 A summary of ideas from
Unholy: Why White Evangelicals Worship at the Altar of Donald Trump by Sarah Posner (Random House, 26 May 2020)

Why Trump? And why, of all possible followers, white evangelical Christians? Trump's appeal is not just a "personality cult," Sarah Posner says. His movement has historical roots. Posner highlights the historical “racist grievances of the American right, beginning with Brown v. Board of Education and persisting through the 1960s and ’70s in opposition to school desegregation.” Today’s popular notion “that an imperious, secular government was bent on stripping Christians of their rights”—in response to which Christians are making laws dedicated to protecting “religious freedom”—originated in that time. Paul Weyrich cofounded the Heritage Foundation, the American Legislative Exchange Council, the Republican Study Committee, and the Moral Majority which conveyed the message that “an ‘elite’ secular political culture…had foisted unwelcome social and cultural changes on white Christians.” The IRS had denied tax exemptions to about one hundred private schools that were “segregationist hard-liners who refused to adopt a nondiscrimination policy even on paper”; Weyrich falsely claimed that the IRS was trying to close the schools altogether. (Abortion, by contrast, didn’t become a rallying cry for evangelicals until the late ‘70s and ‘80s.)

Trump approached the 2015-2016 campaign by “enthralling the alt-right, a once-fringe movement of white supremacists and neo-Nazis...with his cruel nativism and casual racism.” For example, in November 2015, before he’d even won the Republican nomination, he retweeted a false claim about crime statistics sent from a white supremacist account. Previously, American candidates could be expected to refuse the support of white supremacists in clear terms, but Trump never did.

After Richard Spencer made a Nazi display, for example, Trump heard the concerns of New York Times reporters and still required three days before he was willing to speak the words: “Of course I condemn.” Hardly a convincing repudiation of Neo-Nazism (as Posner sees it and presents it in this book). As a result, the far-right increasingly believed that Trump was lifting them from the fringe and carrying them into the mainstream.

Trump, in part because of behavior like this, also “simultaneously drew the attention of curious white evangelicals, many of whom also responded to his racist, anti-immigrant, and anti-Muslim rhetoric, cheering it as a brave assault on political correctness.” It didn’t matter that “he did not even try to tell a personal salvation story or display the most rudimentary Bible knowledge.” Evangelicals wanted him nonetheless because they saw him as a “a wall builder, a rule breaker, and most important, a strongman.” They wanted “a leader unbowed, one who wasn’t afraid to attack, head-on, the legal, social, and cultural changes that had unleashed.” Trump also “satisfied many evangelicals by picking Pence as his running mate, and he lined up his final, crucial endorsements from important figures like Perkins and Dobson.”

Their choice of Trump isn’t merely a transactional bargain in which evangelicals set aside their religious convictions in exchange for some policy wins. Trump delivers not only “policy” but “power,” and for that reason they consider him “anointed, chosen, and sanctified by the movement as a divine leader, sent by God to save America.” He is part of their religious convictions. They grant unprecedented leniency for his religious apathy and illiteracy, while he uses unprecedented power on their behalf.

Although Trump is illiterate in evangelicals’ lexicon and spent his adult life flagrantly contravening their sexual mores, his evangelical supporters are nonetheless starstruck. He may not be one of them, but they idolize how he loudly and fearlessly articulates their shared grievances—that alien anti-Christian, anti-American ideologies have taken over the government, judiciary, media, education, and even popular culture and forced edicts upon a besieged white Christian majority, cowing them into submission by invoking 'political correctness' that aims to censor, silence, and oppress them.

White evangelicals identify with Trump so completely that, for them, “defending him,” Posner says, “became indistinguishable from defending white Christian America.” He enables their “Christian supremacist agenda” while they enable his “white nationalist agenda.”

The far-right opposes international cooperation, or what they see as a New World Order. The religious right-wing uses the phrase “shining city on a hill” to represent the myth of “American exceptionalism.” It was a favorite phrase of Reagan’s in his campaign speeches; Reagan added the word “shining” himself, but otherwise it is a reference to the Sermon on the Mount. Today, the religious right-wing and also the political far-right wants the United States to boost its own power “defined by a rejection of the hard-won and fragile American values of democracy and human rights, and by an exaltation of authoritarian natalism, xenophobia, and homophobia.”

The religious right-wing assigns Hillary Clinton the role of the villain in this story. In their view,

the fact that he vanquished her while spurning political customs of probity suggests a supernatural force must be behind his improbable rise—because only by a divine hand could the rigid conventions of politics and the satanic machinations of the powerful have been so decisively shattered.

Religious leaders shield him from all criticism, thereby giving

moral cover to the president’s racism and white nationalism. With each tweet excused or rationalized, with each racist utterance waved off as misunderstood or manipulated by 'fake news' to make Trump look bad, with each rejoinder that it is Trump’s critics who are fomenting divisiveness, Trump’s evangelical loyalists have helped make the unthinkable — an overtly racist American president — a reality.

His offenses include "casually racist tweets or statements, policies that banned immigrants and refugees, deported them, detained them, or otherwise mistreated them, including children and babies." In mounting defenses of these, "Trump’s evangelical defenders were effectively solidifying the Republican base as committed to both Christian and white nationalism."

Trump and the religious right-wing are politically symbiotic because “the movement desperately needed a savior; Trump was eager to oblige because of his bottomless need for a worshipful retinue.” It makes sense, then, that while only about a third of Americans who are not white evangelicals believe that Trump told the truth about the Mueller investigation, two-thirds of white evangelicals say they believe Trump on the matter. And Trump, for his part, will embrace any evangelical leader who is loyal to him.

The religious right-wing has "sustain[ed] a presidency in the face of unprecedented scandal," Posner says, demonstrating that their movement is still very much alive in the 21st century.