Throughout U.S. history, Masha Gessen (they/them) begins their new book Surviving Autocracy, there has been a national myth of a "fundamental structural state of exception that asserts the power of white men over all others," i.e. a narrative that we'd immediately be plunged into chaos if we didn't let white men have all the control. (A "state of exception" is the use of an apparent crisis as a pretext for overriding existing legal constraints on the ruler's power.)

At the end of their book, they cite the historian Greg Grandin. Grandin, pointing out the United States' colonialist "myth of a goodness it embodied," observes that Trumpism "rejects even the myths that were used to justify expansionism." Trump is committed to isolationism and to narrowing the in-group of who counts within American democracy. Indeed, when he lies to justify a military attack, he embraces "the sense of inhabiting a contracting space rather than an expansive empire." In this way, Trump is unlike the younger Bush, who at least had a "pretense of promoting democracy" or "policing the world" behind his false claims.

These ideas, and very much more, in this book: 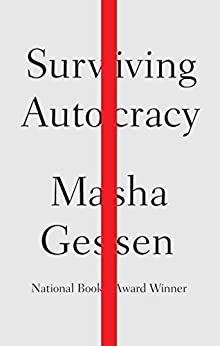