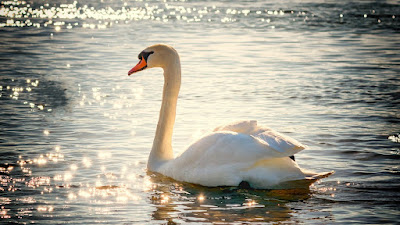 A few minutes ago, the Washington Post published "Russia’s last independent news station suspends broadcasts". TV Rain, the last remaining independent TV/radio news in Russia, has gone dark. Lateshia Beachum explains: "Russia blocked access to the station and declared it and fellow news station, Radio Echo, as foreign agents for their coverage of the war with Ukraine in which they used the terms “war” and “invasion,” usage of which the Kremlin has banned, the New Yorker reported." The reporters have fled. The story continues: "The last seconds of TV Rain’s broadcast, where one of its journalists walked off reportedly saying “no war,” was of a black-and-white broadcast of Swan Lake. The last time the station aired the performance was in 1991 when the Soviet Union was on the edge of collapsing, according to NBC News."

The last seconds of the Dozhd TV channel's broadcast looked like this. pic.twitter.com/p4t14T2Ghq

Image of the swan by Peter H from Pixabay