Descriptors in Yolen's 'Tale of the Seventeenth Eunuch' (with spoiler) 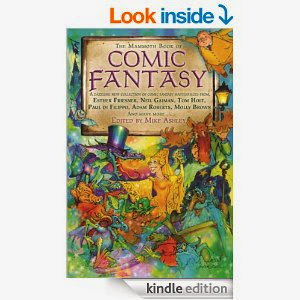 Jane Yolen's "The Tale of the Seventeenth Eunuch" is a short story of about ten pages that was published in The Mammoth Book of Comic Fantasy (1998).

It is narrated by someone who identifies himself in the first sentence as "the seventeenth eunuch of the Lady Badroulboudour". Hearkening to a verse in the Gospel according to Matthew, he says of his fellow "bed guardians": "Some of us were born so, some were created so by other men, and a few are self-made – or self-unmade."

Lady Badroulboudour, now fifty years old, recalls her late husband, The Aladdin, as a magnificent lover. Her many daughters are married off to princes, and her many sons have become rulers themselves. Her eldest son requires her to stay in her palace rooms so that she will not become meddlesome. He gives her many eunuchs, who "tried to pleasure her – for do not think that eunuchs are devoid of sexual passion," the narrator says. "It is just that we cannot father a child."

Lady Badroulboudour is described entirely in terms of her jewels, cosmetics, perfumes, devotion to her cats and inclination to romance. When she finds The Aladdin's magic lamp, the one he had used to acquire his riches and power, the only thing she can think to wish for is a lover. There are three genies in the lamp, all "rounded and hairless" and described in terms of their size relative to eunuchs. When Lady Badroulboudour sees the first genie, she cries, "I have had enough of you half-men!" and the genie replies, "I am no man, lady."

Lady Badroulboudour would prefer that her dead husband be returned to her, but genies warn her to be careful what she wishes for, since they cannot restore the dead to life. She is then willing to accept any fine man that they might be able to bring her, except that she cannot imagine any man who could match the memory of her Aladdin. She is finally willing to accept that one of her pets could be transformed into a man.

It is Lady Badroulboudour's fondness for her cats, and the third genie's willingness to transform a neutered cat into a human being, that results in the genesis of the titular "seventeenth eunuch," lending this its place in a comic fantasy collection.
- October 29, 2014
Email ThisBlogThis!Share to TwitterShare to FacebookShare to Pinterest
Labels: eunuchs in literature, fiction about eunuchs, jane yolen, mammoth book of comic fantasy, tale of the seventeenth eunuch