The film "Expelled: No Intelligence Allowed" was advertised heavily, but did not successfully argue its case for intelligent design over evolution. Originally posted to Helium Network on May 8, 2008. 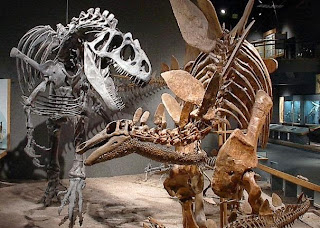 Ben Stein's much-hyped "Intelligent Design" documentary "Expelled: No Intelligence Allowed!" is almost devoid of science and philosophy, and frankly, it is boring.

Stein conducted a series of interviews with American scientists who believe their academic careers were ended as a result of mentioning Intelligent Design (ID). These dismissals, which could have had as much to do with personnel management as with free intellectual exchange, were not thoroughly investigated. Nor did Stein paint an adequate picture of why many scientists might disapprove of their fellow scientists' ID beliefs. His use of sound bites, many from pre-recorded videos of unknown subject matter, does not inspire confidence in the soundness of his argument.

In cinematography mimicking Al Gore's documentary "An Inconvenient Truth," the film opens with a lonely image of Stein in a suit, waiting to walk on-stage to give an academic presentation on an inconvenient topic. He uses footage of the building of the Berlin wall and ridiculously invokes the name of Martin Luther King, Jr. to proclaim that Americans are losing their freedom in science.

About 15 minutes into the film, it looks like some actual content might begin to unfold. An ID representative says that not all adherents are Christians. Another notes blandly that "questions that aren't properly answered don't go away." Others says the debate should be settled by "arguments and evidence" rather than by popularity or by lawsuits. Then, flaunting the foundation of civility that has just been established, an ID scientist, reclining in his armchair, calls atheist scientist Richard Dawkins a "crummy philosopher" and a "reptile."

Instead of granting interviews to Darwinists to allow them to explain their positions, Stein represents them through the insertion of extraneous, mid-20th-century video clips, thereby variously depicting them as slapstick goofs, religious prelates, shushing schoolmarms, Nazis, executioners, cowboy gangsters, Dr. Frankensteins and Planet of the Apes villains.

Stein asks rhetorically: What are we to make of the fact that science is aware of more cellular complexity today than it was in the 19th century? Who has a theory about the beginning of life, given that Darwin's theory begins after the appearance of the first cell? And, since Darwin was a non-conformist in his day: "If Darwin wanted to challenge the consensus today, how would he do it?" All good questions, but no answers are attempted, which does not speak to the usefulness of the ID theory.

It seems that ID proponents generally believe in an evolutionary process while also believing in a Creator who set the process in motion. So, one might wonder, why aren't Intelligent Design and Darwinism compatible and complementary in their simplest forms? This is a major failure of "Expelled": viewers are told at certain times that ID is not the same as Creationism and that it allows that a Creator could have initiated evolution, and they are told at other times that the belief in evolution itself ("Darwinism") is the root of all evil.

Stein identifies himself as a Jew only in the latter half of the movie, with footage of him visiting gas chambers in Nazi asylums. He strongly implies that one reason to eschew the theory of evolution is that it once led to Nazism. Darwinism, he claims, was an integral part of the Nazi belief in slaughtering the unfit, but he does not explain this connection in detail. One interviewee baldly asserts that Darwinism is a necessary, if not sufficient, condition for Nazism. This is not at all obvious. There is a difference between Darwin's biological theory of evolution and its policy incarnation as so-called Social Darwinism. Social Darwinism could have been merely a rationalization for death camps that would have existed in any case. And, of course, the ethical misuse of scientific knowledge for cruelty and destruction does not mean that the science is false.

As a negative example, Stein interviews a scientist who confesses that his own belief in evolution led to his disbelief in God, immortality, morality, freewill and meaning. The man seems unperturbed by these conclusions. Stein, however, feels differently, and is more interested in passing judgment than exploring the other man's psychology.

Stein concludes that Darwinism leads to moral nihilism, liberal approaches to abortion and euthanasia, and the "de-privileging" of the human status. Of course, he does not analyze this sweeping meta-ethical claim, nor does he unpack the controversial political-religious claim that the right to choose abortion and euthanasia denigrates human beings. (It should be unpacked; after all, many people claim the opposite.) Nor does he explain what he means when he says the "spirit of eugenics" is alive today through the U.S. reproductive health clinic Planned Parenthood, through the tenuous connection of early 20th-century birth control advocate Margaret Sanger. In this segment, he also slips in a disturbing comment that Darwinism leads to the dissolution of the relationship between religion and science. Why should anyone believe that we should strive to maintain such a relationship, which historically has meant that religious authorities reserve the right to deny scientific theories?

Saved for last, as if it were to be the crown jewel of the film, is an interview with scientist, atheist and bestselling author Richard Dawkins. Stein initiates the interview by accusing Dawkins of calling God naughty names, to which Dawkins happily admits. Pulling a page from Stein's script of intellectual freedom, Dawkins calls for liberation from superstition. Instead of directly addressing the fact that some people find freedom in atheism, Stein changes the subject to imply that no one really agrees with his adversary: "There are 8 billion people in the world, Prof. Dawkins; how many [fan] letters have you had?" (One must assume he is jealous that Dawkins' recent book The God Delusion probably sold better than his own several dozen books put together.)

He then engages in this obnoxious interrogation:


Stein: "Who created the heavens and the earth?"
Dawkins: "You beg the question-"
Stein: "Well, then, how did it get created?"

The philosophical meaning of "beg the question" is "assume what you are trying to prove." Dawkins was starting to say that the ID advocate cannot assume right off the bat that the universe was created by an agent; the ID advocate must first argue that there was a creation event and an agent behind it. So, Stein's follow-up question "How did it get created?" is irrelevant to what Dawkins has begun to argue.

Next, he claims he has gotten Dawkins to concede that ID could possibly account for the origin of life, when what Dawkins actually says in the interview is that, if alien beings created life on Earth, those beings themselves would have had to have evolved. Dawkins believes, in other words, that there could conceivably be intelligent agents who can create life, but those agents are not gods who operate beyond the laws of nature; they, too, would be subject to the overall principle that life evolves.

Dawkins was generous to consent to appear in the film, and Stein was lucky to have him. The interaction was reminiscent of a "South Park" episode in which a white character apologizes to Al Sharpton for using a racial slur, and another character cynically remarks: "Al Sharpton is not the president of black people!" Well, Richard Dawkins is not the king of atheists. "We" - to use the "royal" term - are not impressed merely by the obtainment of an audience with Dawkins. Stein was not intellectually prepared for the interview, and he "won" the argument only by turning off the camera.

"Expelled: No Intelligence Allowed!" does not reach out to unfamiliar and unsympathetic people and therefore cannot be anything other than a sermon to the choir. It makes sense, then, that on a Sunday night, two weeks after its national première, only a short subway ride from Harvard University, there were only 14 people in the theater.

"Expelled" focuses on a handful of Intelligent Design intellectuals with grievances against Evolutionist intellectuals. The film does not explain their ideas, but is merely a forum in which they vent about their victimhood. There is no substantial science, philosophy or even investigative journalism; more effort went into the compilation of humorous, antique video clips to mock the opponents. As a result, one will find more science in "Kinsey" and more philosophy in "Star Wars".