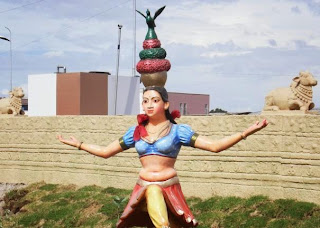 Dr. Sharad P. Paul's novel Cool Cut (2007) follows three friends growing up in the state of Tamil Nadu in southern India, in a small Tamil-speaking village on the banks of the Kaveri River. It is the mid-twentieth century and the teenagers look toward Madras as the big city. Told in clipped, Hemingwayesque sentences, the novel captures a certain childlike simplicity while tackling large themes of love, death, violence and cultural continuity.

Kumar and Lakshmi are just old enough to begin to dream of falling in love with each other, but they must contend with a culture that expects arranged marriages. Their friend Raman flies kites with them in games that are won by maneuvering one's own string to slice through the competitors' strings. The "cut" remains an important metaphor for Kumar, who becomes a barber, and for Raman, who becomes a eunuch.

After he is all but expelled from school, Raman takes the train to Madras to live with his uncle, but at the train station he is jumped by several eunuchs who throttle and club him unconscious. The next thing he knows, he has been made one of them. After his recovery, other eunuchs don white saris and put turmeric paste on their skin to perform his naming ritual. They put lit candles at his feet, burn camphor and chant a prayer. He is renamed Ramani, "the adopted daughter of Lord Ganesha." From this point on, the narrator consistently uses feminine pronouns for Ramani's character, just as is done for the other eunuchs.

The leader of the group that has kidnapped Ramani considers herself a kind of adoptive mother of her girls. Discovering that Ramani has a talent for dancing, she charges a fee for her to dance at parties.

Ramani herself does not express regret for her situation. Although she is angry about having been kidnapped and violently assaulted and she resents the leader of the group for her severe ways, she does not seem to mind her own forced gender transition or her physical loss. Only in an abstract way does she reflect that

"Eunuchs have no identity; zombies with no identity and no options....eunuchs are like weeds - catching debris from the river of life; a combination of stagnation and decay. The river of life will flow through the weeds, until life is renewed again in the sea."

It is home that she longs for.

The group's leader privately rationalizes her behavior of kidnapping and mutilating teenagers: "Everyone knows eunuchs are necessary, and have magic powers." Besides, "all birth is traumatic." (Another character suggests that eunuchs must kidnap because they cannot reproduce, and if they do not have younger dependents like themselves, they will have no security in old age.) When annoyed by a group of boys, the leader threatens to reveal what is (or rather, is not) under her skirt, which would be considered as a form of curse against the boys.

Some readers might find this characterization stereotypical and off-putting. That eunuchs ever kidnap or raise their skirts at all is a controversial claim; Dr. Piyush Saxena's recent nonfiction book Life of a Eunuch argues vehemently against both of these allegations.

The leader also proves capable of brutal castration as an act of vengeance, not just as a way of creating more adopted daughters.

"Ali" is the word for eunuch most commonly used in the story. It is identified as a southern Indian term, whereas the more widely known term "hijra" is said to come from northern India. A character with the trust-inspiring epithet of Professor explains that "hijra" derives from the Arabic word for a spiritual pilgrimage. One might be perplexed by a competing claim on the first page of John Speed's novel Tiger Claws (also published in 2007, but set in the year 1658) which says rather that "hijra" was perceived as a derogatory term from common Hindi and that Muslim eunuchs of that era preferred the term "mukhunni" meaning "short-tusked."

Aside from the questionable depiction of the eunuch community in this novel - a depiction that is simultaneously sympathetic and damning - this is a memorable, ambitious story that packs many broad themes into a short text.
- October 19, 2014
Email ThisBlogThis!Share to TwitterShare to FacebookShare to Pinterest
Labels: ali, cool cut, eunuchs in india, eunuchs in literature, fiction about eunuchs, hijra, indian eunuchs, kidnapping, magic powers, novels about eunuchs, sharad p paul, tamil nadu