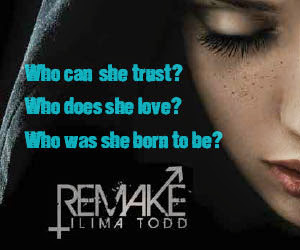 Remake by Ilima Todd (2014) is reminiscent of the Hunger Games trilogy in many ways. There is a teenage female narrator in a dystopian society that blends high- and low-tech and is designed to prevent her escape; her two male love interests, both of whom are devoted to her; and a populace with the ability to request that their skin be permanently dyed pink or green and that they have dinosaur horns installed on their foreheads. All of this is presented by a writer with a direct, spare use of English, like a YA Hemingway.

In this society, human infants are reared in "batches" apart from any concept of family, and they are given hormone blockers to prevent sexual development. In their late teens, without any counseling, they are asked to give decisive answers to questions that will determine the rest of their lives. Chiefly, they must pick a profession, a name, and a gender. The last decision comes in two options: either they will have their hormone blockers removed so that their bodies will develop sexually on their own, or they may request additional hormonal and surgical intervention so that they may become a member of the "other" gender. (It is never explained what characterizes the genders of "man" and "woman" in this particular society, especially since there is no reproductive family structure; how or why someone's physical sex is supposed to correlate with that social role; nor why the government is so anxious to ensure that people conform physically to the gender role they choose for themselves.)

In the book, if a person chooses continued intervention to change their sex, their blockers are made permanent via an implant. This is not a medically accurate scenario. Someone receiving the sex hormones of the "opposite" sex would not need or want hormone blockers anymore, and it would be especially unnecessary if the surgeries – left unspecified in this book – included the removal of the glands that produce hormones.

The novel's premise raises a number of questions that go unanswered. Why must all the decisions be made at the same time? Why at a particular age? (What does a pre-pubescent 17-year-old deliberately raised in ignorance about many sexual matters know about their gender identity that, say, a pre-pubescent 11-year-old does not?) Is the decision day just a matter of convenience for the state, so that batches of humans vote on the same day and get it over with and don't drag out the decision process for years? And is the seemingly late hour of choice deliberate because the state wishes to keep the teenagers behaving in a childlike manner for as long as possible because they are more compliant that way? What happens to intersex people, those who do not – or will not, when allowed their natural hormones – neatly fit either the male or female category? (They are not mentioned in the book.) Why does the state want anyone to have sex hormones at all, given that only specially designated people are allowed to reproduce anyway? If they just want to assign gender roles, why can't they assign those in the same way they assign professions? Why does it require hormones to undergird the gender roles?

Finally, one might point out (although the author certainly does not) that this particular dystopian control system not only screws with the cisgender/heterosexual framework (which I think she is implying ought to be normative) but also redefines what it would mean to be transgender or otherwise queer. In other words, if the state messes with children's hormones and then suddenly forces them to make a permanent choice about their hormonal and anatomical future which probably does not include the right to reproduce, then nobody is given the opportunity to get in touch with what the reader is probably predisposed to think of as a true self: Nobody meaning not straight people and not queer people. Everyone's sense of authentic self is frustrated, if "authenticity" is understood as something mostly private and mostly uncorruptible by outside coercion.

In this scenario:
One might suggest that the book is an allegory and that the gender-change premise is only a symbol within the allegory. On this interpretation, the author expresses neither complaint nor praise for gender reassignment of the sort that real transgender people really go through, because the message about gender-change isn't intended to be imported quite so literally back to the home planet. This would, however, be a tough argument to make. First of all, if there is a broader allegory, what is it and what are its component symbols? If this book isn't a dig at queer people, what is it? If it's just an indictment of tyranny in general, why are transsexual kids (aside from eugenics) the only symptoms of tyranny in the story?

A quarter of the way through the novel, the heroine is exposed to an alternate society, seemingly very much like Hawaii, where people live freely in family units. This Margaret Mead observes their behavior and asks the "What are sexual norms?" questions. One of the individuals she encounters in the free society complains about the "awful surgeries" perpetrated by the heroine's native dystopia against its inhabitants.

Halfway through the novel, she discovers a copy of the Bible – although no character's religion is ever identified – and she reads about the creation of Adam and Eve. This leads to a brief dialogue about marriage and babies. (Note that the novel's publisher, Shadow Mountain, produces non-religious books that "reflect the values espoused by The Church of Jesus Christ of Latter-day Saints.")

The heroine is initially unsure about whether she wants to develop naturally as a female or change to male since she doesn't see any particular meaning or advantage to either. Her indifference is central to the novel. She only begins to form an opinion when she gets kissed by a boy, at which juncture she says to herself: "Today, it feels really good to be a girl." (No, she does not pick the name Cinderella.) When one of her suitors flirts with her by drawing a picture of her that imagines her hugely pregnant (hey, whatever works), she reflects that childbirth would be "worth it" because of "how absolutely wonderful and perfect in every way" her suitor's baby brother is. Later, she alludes to "a smoothing, sharpening, cutting away and building – not of my body, but of my spirit" and praises a transition of "my character, my strengths, my fears and devotion."

Adding to the biology-is-destiny reading, the Goodreads ad for the book bears the question: "Who was she born to be?"

The problem in this dystopia, as the author appears to want us to understand, is that the state is sterilizing almost everyone and furthermore is allowing people to choose a physical sex that is different from the one they were born with, a medical intervention which somehow (of course it is not explained how) undercuts the character of the person they were born to be. But is this really the problem? One might reasonably ask: If the smoothing and sharpening of the spirit occurs independently of physical changes, then why does it matter if someone wants to change their physical sex? Especially if they are going to be sterilized anyway? And might there be people who would be content to choose sterilization, if allowed the choice, because their destiny is not to be parents? There is certainly something wrong with state coercion and secrecy about matters concerning the bodies of children and adults, but the author hasn't convincingly pinned the problem. She seems to be arguing that a large part of the social problem is that people are allowed to choose transsexuality. The real problem in this fictional society looks like totalitarianism, not transsexuality.

It would have been interesting – though a very different book – to explore a range of reactions of different characters to the question of what gender they will select and the underlying reasons for those feelings. A deeper way of pushing this would be to ask at what point on the spectrum of conviction or discomfort with one's gender would one take the "harder" route of hormonal and surgical intervention? Furthermore, is that route indeed significantly harder in a society where the state has already given everyone hormonal intervention since childhood and will continue to provide related services for free, both of which make a "sex change" seem like a default choice or a benefit; where the state prompts everyone with the question, in case they don't raise the question themselves; and where roughly half the people are doing it?

The questions that the author or publisher wants readers to ask are listed as possible discussion points at the end of the book. These include: "Do you think there’s more to being male or female than the obvious physical differences? If so, what? Are these traits learned or inherent? Can artificial hormones change this, or is gender a part of who you are no matter what you alter?" Also, as the oppressive state allows its teenagers "the freedom to choose whatever they want," readers are supposed to ask, "What are the dangers of having no consequences for our actions?" The "no consequences" part was not obviously illustrated in the story. To the contrary, the teenagers were being forced to make life-changing decisions that had significant consequences that they were not allowed to go back and revise. Maybe this is an allusion to the assumption that they will all be infertile and can have no-strings sex. But there were consequences to this social arrangement – they didn't have families, for one thing. If anyone was truly consequence-free, it was the dystopian schemers-in-power, not the hapless inhabitants. An alternative dissenting argument could be made that the people in the free society were less bound to consequences because they had the possibility of democratically establishing their norms and deciding what the consequences would be, as contrasted with the people in the dystopia who had no choice at all. Overall, it's not obvious who it is who enjoys "no consequences," and it seems that this fear trope appears in its usual political context to dredge up concern that somewhere a queer person is going around making free choices and no one is stopping them. This is not explicitly part of the book, but it can be suggested by the book's context in what we know about our real world.

This fictional world is limited in its possibilities because it points to large gaps of social and psychological understanding that the author does not seem willing to make explicit and explore. It's unclear who would be the ideal reader, aside from a cisgender child who wants a literary reference to help them articulate why they feel uncomfortable around a transgender child and then to feel smug about their judgement, or maybe a transgender child who has difficulty deciding whether to transition and who finds strength in the mythological implication that they'll be more likely to be kissed by a soulmate if they don't transition and if they instead channel their bravery into a sexually normative endeavor. Such people exist, but accommodating these desires is sad.

It would be good to see this fictional world resurrected in fan-fic from a transgender perspective. We are more likely instead to see a sequel of Remake, as many plot elements were left untied.
- October 24, 2014
Email ThisBlogThis!Share to TwitterShare to FacebookShare to Pinterest
Labels: dystopia, gender change, hunger games, ilima todd, remake, transgender