Changers, Book One: Drew is an entertaining tale of a boy who wakes up and discovers he's a girl. His mission is to find out whether he prefers being a girl. Originally posted to Helium Network on March 19, 2014. 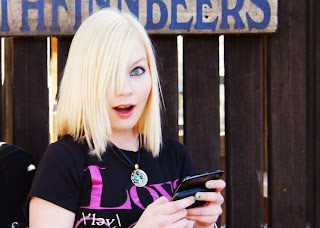 Changers is refreshing new speculative fiction for young adults by T Cooper and Allison Glock-Cooper. The premise is that – in a benign version of The Metamorphosis – a happy, skateboarding eighth-grade boy wakes up just before high school begins and discovers that he has transformed overnight into a different, hotter person.

The teen's prescient parents at least had the decency to move the family preemptively to a new town. Their new home happens to be in Tennessee, which the unsuspecting child says "may as well be the moon. The moon with about a thousand fried chicken restaurants on it." It isn't long before the child has more important things to worry about.

Changers, Book One: Drew
Book One: Drew, the first of the four books in the series, was released in early 2014. It follows the character's first year in high school as a blonde girl who tries out for a cheerleading squad that dredges up visions of the "Dallas Cowboys Cheerleaders" reality show.

Although Drew was not aware that she was going to shapeshift into a new "Version" of herself, her parents were. In the novel's world, being a "Changer" is a hereditary condition. Drew is immediately plugged into a community of Changers like herself so she can receive guidance and support. She's told that she'll live each of her four years of high school as a different person, with a different set of abilities that accompany the new mind and body, after which she will be compelled to decide which of the four identities she wishes to assume permanently.

The usual challenges of puberty are magnified for a young teen who is unexpectedly and suddenly a different sex. "I feel fat," Drew thinks; "What the hell is that about?"

Why this book is awesome

In what other novel has anyone ever been branded with a doubled-up Vitruvian Man on their butt to indicate that they belong to a secret society of gender-changers? Is this not like a "Da Vinci Code" for young, modern transgender people? It is about time that there was some bra-sy, ballsy fiction on this theme.

The secret society is thought out and described just enough, having been organized by the parents in the same way that high school overall is something that is planned out and largely taken for granted by teenagers. The mechanisms that would be inexplicable or nonsensical – Why morph into a new body on the first day of each academic year? – are wisely left well enough alone by the authors.

Drew is not a superhero. She has her doubts and vulnerabilities. She knows she's not good at keeping a journal, nor even simply at sitting quietly and thinking, and is somewhat relieved that her requirement for daily introspection can be documented with the help of the injection of a special chip into her arm that records her thoughts. She frets that

"if this whole Changer mission is about improving the human race by making everyone kinder or more understanding or some crap, then they shouldn't have involved teenage girls."

And yet this book does carry potential to increase understanding. It has been blurbed as having "changed the way I think" by no less a luminary than Clay Aiken – who, for those who sleep under a roof known as "rock," placed second on American Idol in 2003.

Finally, for readers of legal age, this is a great "beach read" that can be enjoyed with a stiff drink, after which the premise may seem mostly totally credible.

The premise is like an implicit prompt from author to reader: "Who would you want for your four teenage incarnations?" Remember that a "Version" is not just a physical body and social identity, but also a set of physical and mental traits and talents.

The roster's combinatorics are endless. One might ring up the lovepuppy Georgia Nicolson (of Louise Rennison's On the Bright Side, I'm Now the Girlfriend of a Sex God); the sociopathic Jacob Barber (of William Landay's Defending Jacob); the survival expert Katniss Everdeen (of Suzanne Collins' Hunger Games trilogy); and the doomed, four-eyed Piggy (of William Golding's Lord of the Flies).

Will the 'Changers' survive?

Book One: Drew is a clever, fun story that would make a lighthearted gift for adults and could be a good conversation piece for young teenagers, too. It can be ordered from Book People  based in Austin, Texas. (I got my copy from Calamus Books, an independent bookstore in Boston that shut down several years later.) Readers will have to wait for the release of the promised next titles in the series. These are expected to bring not only more gender changes, but also the developing saga of the nasty "Abiders" who are out to destroy the "Changers."
- October 27, 2014
Email ThisBlogThis!Share to TwitterShare to FacebookShare to Pinterest
Labels: allison glock, allison glock-cooper, changers, t cooper, trans kids, transgender author, transgender fiction, transgender youth, transsexual author