How do dogs experience language and communication?

"When you say "ball," your dog likely has a different category of objects in mind than you do. Researchers taught a border collie named Gable made-up words to denote certain objects, including a horseshoe-shaped toy they called a "dax." When human babies learn to link a word like "ball" to a tennis ball, they're most likely thinking that "ball" means objects with a similar shape — like a basketball or a golf ball. But when researchers asked Gable to get another "dax," he picked out an object of a similar size or texture to the original horseshoe toy, ignoring larger or smaller toys of the same shape. Dogs, it seems, don't share our "shape bias," study author Emile van der Zee, a psychologist at the University of Lincoln in England, tells LiveScience.com. He thinks humans may have evolved to prioritize shapes when learning language because for us, "vision takes priority over the other sensory systems." Dogs handle objects with their mouths, so size and texture provide more relevant information."

"Dogs suffer from a wide variety of emotional disorders, many of them brought on by the sort of selective breeding that destroys or radically alters their systems of communication. Tail docking (boxers), excessive facial hair (sheep dogs), ear cropping (Doberman pinschers), pendulous ears (bloodhounds), and uniform coloration (Weimaraners) all have forced dogs to seek other means of communication. Often the behavior that we see in them — scent-marking a fire hydrant, for example — is an example of frustrated communication.
* * *
"What happens when a wolf wanders into a flock of sheep and kills twenty or thirty of them in apparent compulsion is perhaps not so much slaughter as a failure on the part of the sheep to communicate anything at all — resistance, mutual respect, appropriateness — to the wolf. The wolf has initiated a sacred ritual and met with ignorance.

We employ a "collective suspension of disbelief" when we have academic conversations that "assume that language determines thought." Steven Pinker wrote in 1994: "A dog, Bertrand Russell noted, may not be able to tell you that its parents were honest though poor, but can anyone really conclude from this that the dog is unconscious? (Out cold? A zombie?)"

"Thinking Without Words". It's a 4-minute read on Medium. Medium lets you read a certain number of stories for free every month. You may also consider a paid membership on the platform. 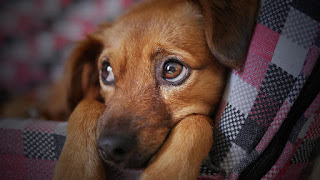 Photo by Moshe Harosh from Pixabay
- May 20, 2022
Email ThisBlogThis!Share to TwitterShare to FacebookShare to Pinterest
Labels: language