Is it 'too soon' to discuss gun control laws in the US? 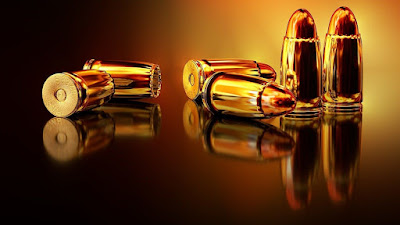 Bullets by MasterTux from Pixabay

When the 1999 shooting at Columbine High School was plastered all over the news — two high school students murdered 12 other students and a teacher — the rest of the world assumed "that gun-loving America would draw a line when it came to mass murders in schools," Nick Bilton wrote for Vanity Fair in 2018. But the right wing said: it was too soon.

"Even on Capitol Hill, the outcry with each shooting appears increasingly muted as a familiar pattern takes hold: Republicans offer 'thoughts and prayers', insisting it is too soon to politicize the tragedy by discussing gun control, while Democrats issue statements calling for action."

After the shooting at Marjory Stoneman Douglas High School in 2018 — where a 19-year-old shot 34 people, half of whom died — Emily Witt wrote in the New Yorker:

"On social media, and on live television, the victims were not playing their parts. They were not asking for privacy in their time of grief. They did not think it was “too soon” to bring up the issue of gun control—in fact, several students would start shouting “gun control” within the very sanctum of the candlelight vigil. What was already becoming clear that night, less than thirty-six hours after the shootings, was that the students were going to shame us, all of us, with so much articulacy and moral righteousness that you willed the news anchors to hang their heads in national solidarity."

Here's one excuse they give. A few hours after the shooting at Marjory Stoneman Douglas, a reporter asked Sen. Marco Rubio

"if he thought it was appropriate to talk about gun control reform after the attack.

"It’s not, only because people don’t know how this happened... who this person is, what motivated them, how did they get a hold of the weapon that they used for this attack," Rubio told Fox News.

"I think it’s important to know all of that before you jump to conclusions that there’s some law we could have passed that could have prevented it."

As also noted in that article, the governor of Florida, Rick Scott, said "'there's a time' to talk about changes in the wake of horrible events but did not say specifically when that time was."

This week, in 2022, there was another school shooting, where an 18-year-old gunman murdered 19 elementary school students and two teachers. The National Rifle Association is prepared to "reflect" on it.

Perhaps we, who are not members of the NRA, could do more than reflect.

With reference to school shootings, USAmericans have wanted to discuss reforming gun control laws since at least Columbine. That was 23 years ago. I wonder if it is time?

In the category of "wait why," guns are not allowed at the NRA convention: 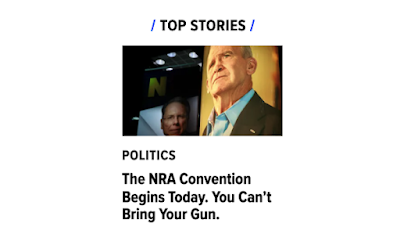 The NRA explained, according to HuffPost, "that Secret Service barred carrying firearms into the convention because several prominent Republicans ― including former President Donald Trump ― will speak there....But attendees wouldn’t be able to bring their guns even if no politicians spoke at the event because the George R. Brown Convention Center itself doesn’t allow weapons of any kind..."

- May 27, 2022
Email ThisBlogThis!Share to TwitterShare to FacebookShare to Pinterest
Labels: democracy, violence