Why do people tell religious stories they don't believe in?

"'I think that for real God is pretend and for pretend God is real,' Rex announced.

Philosophers have a name for this sort of view. They call it 'fictionalism.'

But I think Rex was right...I am a fictionalist about God.

I just don’t believe the stories that we tell. And hearing them in English forces me to confront that, over and over again.

Still, I pretend. And I don’t plan to stop. Because pretending makes the world a better place. I learned that from my kids too — Rex and his younger brother, Hank.

Pretending blurs the boundaries between this world and the ones we imagine. It breathes life into stories, letting them shape the world we live in. Just think of the delight kids take in Santa Claus, even those who know, deep down, that he’s not real. Or the way they lose themselves in play. Pretending makes the world more magical and meaningful."

How does it do so? The pretend stories can remind us "that people persevere, survive and even thrive" although "the world has been falling apart from the start" in part because "there’s beauty in trying to put it back together."

If you want more, Scott Hershovitz has written this book on philosophy and children:

See also my article: "What Can Jews Do When They Don’t Believe in God?". It's a 5-minute read on Medium. Medium lets you read a certain number of stories for free every month. You may also consider a paid membership on the platform. 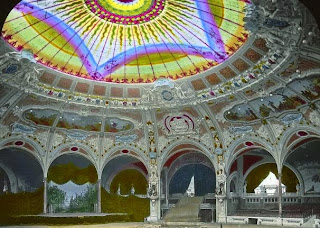 - May 02, 2022
Email ThisBlogThis!Share to TwitterShare to FacebookShare to Pinterest
Labels: atheism, theism