U.S. Republicans plan to lower CO2 by raising it

The Democrats have long had a climate plan, but they cannot pass it because the Republicans won't sign on. There is also one Democratic senator who won't sign on. The Washington Post reported yesterday (and you can read it for free with my gift link):

"Biden’s climate and social spending plan, formerly known as the Build Back Better Act, has stalled in the Senate for months amid opposition from Republicans and Sen. Joe Manchin III (D-W.Va.). If Democrats lose full control of government in the midterms, the president’s climate agenda would face even greater legislative roadblocks, threatening his goal of cutting U.S. emissions in half this decade."

Today, the Republicans plan to reveal their plan for how they'd treat fossil energy. They can pass their plan if they win control of the House in the November. Before their formal reveal, the Washington Post reported:

"The strategy calls for streamlining the permitting process for large infrastructure projects, increasing domestic fossil fuel production and boosting exports of U.S. liquefied natural gas, which proponents say is cleaner than gas produced in other countries..." [emphasis mine]

The problem, of course, is that we need to reduce the use of fossil fuels.

As scientific background, in case it's helpful:

"To meet the more ambitious goal of the 2015 Paris agreement, the world must eliminate coal use within 30 years, according to the U.N. Intergovernmental Panel on Climate Change. Gas dependence should be reduced by 45 percent, while oil use must fall 60 percent by the middle of the century, the IPCC said in a recent report that concluded humanity is running out of time to meet global climate goals."

"Republicans have historically opposed measures to tackle climate change, and the de facto leader of the party, former president Donald Trump, has mocked the scientific consensus on global warming. It is unclear whether the GOP plans would, in fact, reduce carbon emissions, or if they instead largely amount to an attempt to deflect political blame over Republicans’ long-standing opposition to addressing catastrophic global warming." [emphasis mine]

You can't lower CO2 by raising it. This is not even a slow-walk in reductions. It's an increase.

"McCarthy has said that House Republicans plan to release a broad policy agenda ahead of November’s elections to give voters an idea of how the party would govern if it takes control of the House. That stands in contrast to the approach being taken by Senate Minority Leader Mitch McConnell (R-Ky.), who has said Senate Republicans do not plan to release any policy proposals and will instead campaign on their criticisms of congressional Democrats and the Biden administration."

❓Which is worse: House Republicans who propose "increasing domestic fossil fuel production" during climate emergency, or Senate Republicans who don't "release any policy proposals" and only criticize Democrats' proposal to invest in renewables? 🇺🇸[1/2]

🙋‍♂️Whichever strategy leads to a Republican win is worse. [2/2] 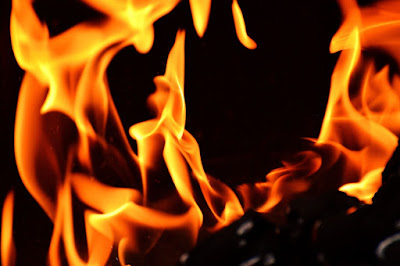 Fire by Alexas_Fotos from Pixabay
- June 02, 2022
Email ThisBlogThis!Share to TwitterShare to FacebookShare to Pinterest
Labels: climate